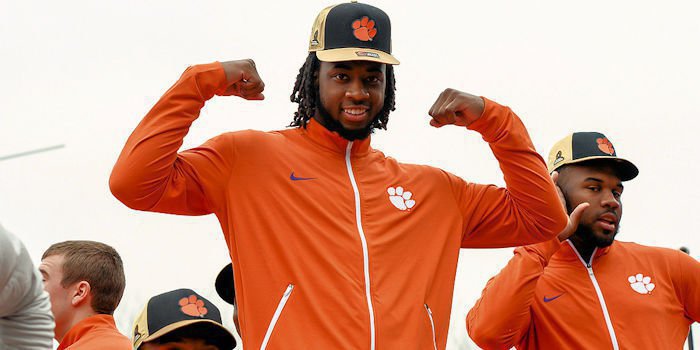 This is one of the hardest positions to rank in my opinion because there have been so many great players here. In my opinion, it is razor thin between Sammy Watkins and Nuk Hopkins. I give the slight edge to Watkins. Despite playing only three years, he is second in career receptions with 240 and first in career receiving yards with 3,391. Both are higher than the Hopkins totals. Sammy and Nuk are tied for first in career touchdown receptions with 27. He is the only player in school history to have over 100 receptions in a season. Watkins was the national freshman of the year, and the only three time All-American Clemson has had at wide receiver. He is also a two-time All-ACC selection. Sammy’s shining moment was his record setting performance in the Orange Bowl win over Ohio State.

Like Watkins, Nuk was here only three years. He is fourth in career receptions with 206, second in career receiving yards with 3,020 and tied for first in touchdowns with 27. Nuk was an All-American and All-ACC choice in 2012. I would say Nuk had the best hands of any receiver I have seen at Clemson. My best memory of his was taking over the game against LSU in the Peach Bowl after Sammy left with an injury.

Butler was a speedster who was an All-ACC track athlete. Back in Butler’s days, Clemson didn’t throw the ball very often, but Butler was the best in school history when he graduated. The Ring of Honor selection is 13th in receptions and tenth in yards with 2,223. Butler was All-ACC in 1977 and 78 and was an All-American in 1978. Butler’s had some huge catches like his ACC championship clinching touchdown at Maryland in 1978, but my favorite was his game-winning catch against South Carolina in 1977.

Like several of the top wide outs at Clemson, Williams was here only three years. However, he is fifth in receptions with 177, fourth in yards with 2,727 and third in touchdowns with 21. Williams was twice selected All-ACC and was an All-American in 2016 when he helped the Tigers to their second national championship.

Few Tigers had bigger catches than the one Gardner made to set up the game-winning field goal to beat South Carolina. Gardner is seventh in school career receptions with 166 and seventh in yards with 2,498. I remember his three touchdown performance at Chapel Hill as one of the best games ever for a Clemson wide out. Gardner was All-ACC in 1999 and 2000 and an All-American in 2000.

When Aaron Kelly left Clemson, he had broken the record for catches and yards. He is still third in receptions with 232, third in yards with 2,733, and fourth in touchdowns with 20. Kelly was All-ACC in 2007 and 2008.

Hamilton was another three-year Tiger. He was valuable as a kick and punt returner as well as a terrific receiver. Hamilton is third in school history in all-purpose yards The Pee Dee product is still sixth in receptions with 167 and ninth in yards with 2,312.

Tuttle was the main target in Clemson’s 1981 national title team. Two of his biggest touchdown catches came at home against Georgia in the season and in the Orange Bowl against Nebraska to secure the title. Tuttle is ninth in receptions with 150, sixth in yards with 2,534, and eighth in touchdowns with 17. He was All-ACC 1980 and 81 and was an All-American in 1981.

No one has caught more balls in Clemson history than Scott who had 245 in his three-year career. He is Clemson’s only three-time All-ACC wide receiver. Scott is also eighth in career yards with 2,480 and helped Clemson to its second national championship.

No one started more games at wide receiver than Smith who is eighth in Clemson history in career receptions with 162 and fifth in career receiving yards with 2,681. Smith led the Tigers in receptions all for years of his career.