I started watching Clemson football in 1974 and can remember all of the great players over the last forty years. I am in the process of giving my thoughts on the greatest Tigers at every position over that 40 year span. I think it is only fair for me to comment on the players I actually saw play. So below is my ranking for the best fullbacks in the last 40 seasons:

Mack was the most productive fullback I have seen at Clemson. Mack was threat with the ball in his hands. In 1983, Mack took over as the main threat in the running game and led the Tigers in rushing with 872 yards. On the season he averaged 5.7 yards per carry. Mack went on to a long NFL career with the Cleveland Browns.

Johnson was a terrific athlete that also excelled with the ball in his hands. He was a big threat as the first option in the triple option during his days. Defenses felt like they had to stop Johnson first and as a result Rodney Williams, Terry Allen, Joe Henderson and Wesley McFadden had more success in the running game.

Few backs were as successful in short yardage as Sims. In 1979, Sims led the Tigers in rushing with 743 yards. He was a big man who had great feet. I just found out this morning that his nickname was "Tippy" because he ran on his tip toes.

McCall played a key role in Clemson's 1981 National Championship. McCall was a lot like Sims in that he was a threat in the option game. When you go back and watch highlights of that great season, you notice just how much of a factor McCall became.

The younger brother of Emmitt Smith made a name for himself at Clemson. Emory Smith had one of the most famous plays in Clemson history when he carried a few South Carolina defenders on a free ride in their secondary in a win at Williams-Brice.

Clemson fans love their fullbacks and they have had plenty of great ones through the years. I also considered players like Junior Hall, Chris Lancaster, Tracey Perry, Rudy Harris, Kelton Dunnican, Terry Witherspoon, Tony Kennedy, Rodney Quick and Chad Diehl 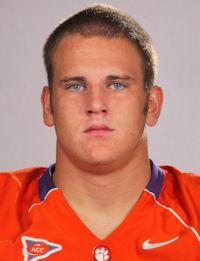 Players like Chad Jasmin and Wesley McFadden played both tailback and fullback at Clemson and were very productive careers in Tigertown. Both would have been in the top five if they were pure fullbacks.

I wanted to take an opportunity to mention a great event coming up next month. The Ryan Harless Foundation is having its 100 Hole Golf Marathon on Friday, July 12 at Brookstone Meadows in Anderson, SC.

"This event is the most fun I have ever had playing golf," says Chris Downey, General Manager WCCP-FM 104.9. "When we did this last year I had no idea how much fun it would be. I will play in this every year I can. When asked to describe it I would say it is like combining NASCAR and golf. Everyone gets their own golf cart and they fly around the course. Last year we played nine holes in about 40 minutes each. We played in a little more than eight hours. This is a chance to have a blast and help local charities. I would recommend it to anyone who loves golf!"