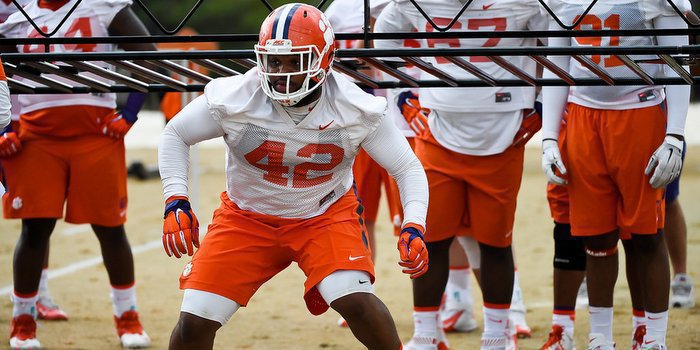 This is the best defensive lineman I have seen at Clemson. This is a tough category because there are so many great ones, but Michael Dean Perry is the best in my opinion. His 61 tackles for a loss is a Clemson career record. His final tackle for a loss broke his brother’s record. He broke the career sack record at Clemson with 28, a record that was later broken by Vic Beasley. Perry was a 1987 first-team All-American. He was the 1987 ACC Player of the Year. He was All-ACC in 1986 and 1987. Perry was an ACC 50-year selection and is a six-time Pro Bowler.

William is Clemson’s only three-time All-American on the defensive line. He was a third-team selection in 1982 and first-team in 1983 and 1984. He is one of two Clemson defensive linemen to be a two-time first team All-American. Perry was the 1984 ACC Player of the Year. He and his brother Michael Dean are the only Clemson defensive linemen to be named the ACC Player of the Year. Perry was All-ACC from 1982-84. He was an ACC 50 Year Selection and a 1984 Lombardi Award Finalist. His 27 tackles for a loss in 1984 is second in Clemson history and is tied for the most by a defensive lineman. His 60 tackles for a loss are second in school history. Perry is fourth in career sacks with 27.

Beasley and William Perry are the only two-time first-team All-American defensive linemen in Clemson history. He was a consensus first-team All-American in 2013 and 2014. Beasley was the 2014 ACC Defensive Player of the Year. His 33 sacks are a Clemson career record. In 2014 he was a Bednarik and Lombardi finalist. Beasley was All-ACC in 2013 and 2014.

Wilkins is just the second Clemson sophomore defensive linemen to be named All-American. He was also All-ACC last season. Wilkins helped Clemson to its second national title. Last season he was a Nagurski Finalist and was named first-team All-American and All-ACC.

Bowers is the only Clemson defensive lineman to win a national award. In 2010 he won the Hendricks Award for the nation’s top defensive end and the Nagurski Award which is given to the country’s top defensive player. That same year he was a Lombardi Award finalist. His 15.5 sacks in 2010 is second in school history for a single season. As a senior, he was a consensus first-team All-American. Bowers was also the ACC Defensive Player of the Year and All-ACC.

Adams is tied for second in Clemson career sacks with 28. He was a Nagurski award finalist 2006. The same season Adams was a consensus first-team All-American. He was also the ACC Defensive Player of the Year and was an All-ACC selection.

Bryant helped a Clemson to its first national title. In 1981, he was a second-team All-American and first-team All-ACC. Bryant was the sixth overall pick in the 1982 NFL Draft.

Jarrett is one of my all-time favorites. He is not as physically talented as anyone on this list, but no one played with more effort. Jarrett led the Tigers to the nation’s top defense in 2014. That same year he was third-team All-American and first-team All-ACC.

Lawson enjoyed a great season in 2015 where he was a Lombardi and Nagurski Award finalist. He is selected as a first-team All-American and All-ACC in that season.

I know it is early in his career, but Lawrence is the first Clemson defensive linemen to make the All-ACC team as a freshman.