I started watching Clemson football in 1974 and can remember all of the great players over the last forty years. I am in the process of giving my thoughts on the greatest Tigers at every position over that 40 year span. I think it is only fair for me to comment on the players I actually saw play. So below is my ranking for the best offensive linemen in the last 40 seasons:

The first five players were the only offensive linemen in Clemson history to be named All-American twice:

The Final Group is Made Up of Players who were either Two time All-ACC, Made All-American and All-ACC in their careers or an Award Finalist

James Farr was a third-team All-American and first-team All-ACC in 1983. In his career he started 35 games, recorded 1,887 snaps and had 122 knockdown blocks.

Jeff Nunnamacher was a terrific offensive tackle that made the All-ACC in 1987 and 1988.

Glenn Roundtree was a four-year starter at guard at Clemson. Like his teammate Jim Bundren, Roundtree started all 47 games in his career at Clemson. He was chosen to the All-ACC team in 1996 and 1997. 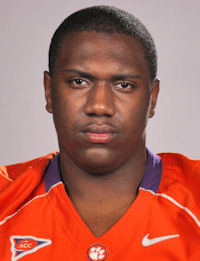 Chris Hairston was an excellent offensive tackle. He was named All-ACC in 2009 and 2010. He is one of just 18 Clemson offensive linemen to make the All-ACC team twice.

Nathan Bennett was a hard-nosed offensive guard that excelled in run blocking. He was a third-team All-American in 2006. He was also All-ACC that same season.

Will Merritt was a smart player and a three-year starter at offensive guard. Merritt was an All-ACC selection in 2000 and 2001.