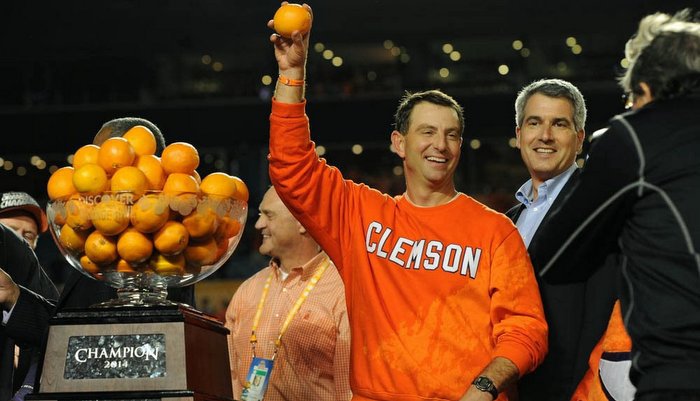 Clemson is in the midst of a championship run this season and has high hopes to win several titles this season. The Atlantic Division, the state championship, the ACC championship and even a national title are still on the table after a 7-0 start.

This is the most important aspect. It isn't enough to just have talent, but talent is the most crucial component for a title team. It is my belief that Clemson is talented enough to win all four titles still in play.

Injuries are a major part of the game as Clemson found out last year when Deshaun Watson went down. You have to build depth, and I think this team has enough depth to win all four titles. When Mike Williams went down, the receiving corps took a big hit, but others have stepped up. When Ryan Norton went down, the Tigers may have gotten better with Jay Guillermo. When DJ Reader and Ammon Lakip missed time, Scott Pagano, Christian Wilkins, Rod Byers, Jabril Robinson and Greg Huegel have been there to play as good, if not better. When Korrin Wiggins went down, Travis Blanks and Dorian O'Daniel were there and haven't missed a beat.

This is a critical component to a title. You have to be balanced on offense and defense to win a title. If you are not balanced on offense, teams have a better chance of shutting you down. There are examples of teams that have only one aspect of the offense that have won titles recently, but it is much more difficult to do so.

The past two weeks Clemson has been as balanced as any team in the country. In the Boston College game, the Tigers passed for 420 yards. In the Miami game, they ran for 416 yards. Being this balanced on offense makes it so much more difficult to defend and to prepare for.

Clemson's defense is talented at all three levels, and the Tigers don't have a glaring weakness against the pass or the run on defense.

If Dabo Swinney has done anything at Clemson, he has improved the focus. Clemson doesn't look ahead or look back. This staff does a great job of keeping the players dialed in to whatever the next opponent brings to the table. This starts with the process of winning every day and competing every day. You can't win November games in September. You can only prepare every day for the next game. Dabo has been phenomenal at preparing his team every week.

Clemson plays its best football when it has a chip on its shoulder. We saw that in the LSU and Ohio State bowl games. We have seen it again several times this year. This team seems to thrive on the doubters. The best thing to happen to this team every week is finding a naysayer and run with the mentality of how bad they are being disrespected.

This is the one thing we don't know and can't predict. How will the ball bounce? Will weather be a factor? Will a bad call by an official be a factor? Turnovers can always occur. Luck is a factor that no one can predict.