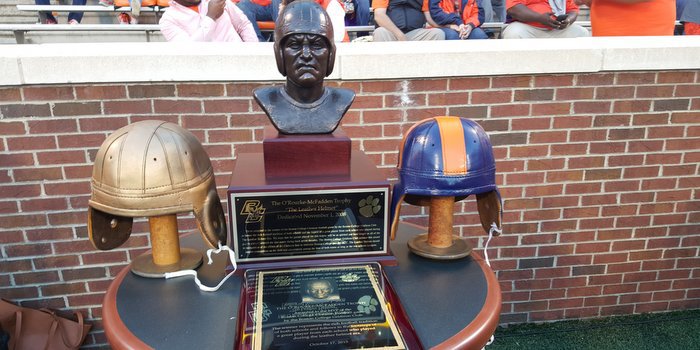 If you are a pessimist, I guess you could find some negatives to point out about Saturday night's 34-17 win over Boston College. Yeah, Deshaun Watson

Deshaun Watson
So. Quarterback
#4 6-2, 207
Gainesville, GA
View Full Profile over threw a couple of deep balls and threw two interceptions. Yes, Clemson allowed 17 points to a bad offense with a freshman quarterback. Sure, the Tigers couldn't run the ball and totaled only 112 yards on the ground.

But Saturday was finally a beautiful day and I am an optimist, so will let the Ole Miss fans pout after a disappointing weekend. Clemson winning by 17 points on a sun-splashed homecoming day is not a disappointment.

I talked to a Clemson offensive assistant at lunch yesterday and he said it was a combination of Boston College's scheme and personnel that caused concern. He said they play a very aggressive defensive scheme and we knew we would have some opportunities going downfield. He also said they play hard and tackle really well and was not surprised they were ranked so high defensively.

I also talked to a senior on the offense last night as he said the same thing. He added, "They wanted to play you in a phone booth, but we thought we could spread the field and take some shots." He later added, "Playing BC is always a tough game physically. They play us hard every year, so you feel good to get out of that one with a win."

The Tigers got down 7-0 after an early interception set up the Eagles deep in Clemson territory. But Watson and company stuck to the game plan and the passing game was the major threat. Watson went 27 of 41 for 420 yards with three touchdowns.

Artavis Scott
So. Wide Receiver
#3 5-10, 191
Oldsmar, FL
View Full Profile who had 10 catches for 162 yards and a score. This was another strong performance from five-star true freshman Deon Cain

Justin Falcinelli
RS Fr. Offensive Tackle
#50 6-3, 293
Middleton, MD
View Full Profile got in some quality time. It was some blocking issues and a good defense that held the Tigers' running game in check, but the passing game helped lead to long touchdown drives. Clemson had scoring drives of 75 yards, 66 yards, 80 yards, 69 yards, 98 yards and 85 yards,

Defensively, Clemson held the Eagles to just 11 first downs and 246 yards including only 87 passing. The Tigers also forced ten punts.

Clemson was solid in the kicking game as Greg Huegel

Greg Huegel
Fr. Punter / Kicker
#92 5-11, 180
Blythewood, SC
View Full Profile made both of his field goal attempts. The Tigers did not allow any punt return yardage and the kick coverage was solid, holding BC to just 22.0 yards per return.

Ryan Norton
RS Sr. Offensive Line
#58 6-3, 284
Simpsonville, SC
View Full Profile this week from injury and DJ Reader is back to add some depth along the defensive line.

So a nice win ends a three-game home streak. The Tigers have only played on the road once this season and had some issues at Louisville. This week's trip to Miami and next week's trip to Raleigh might provide some more of the same.

The good news is that Clemson is the better football team, just like it was again this past weekend.