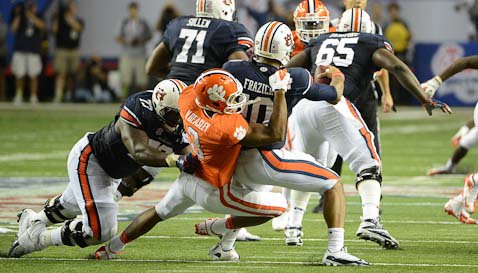 We found out yesterday that Clemson and Auburn have scheduled a home-and-home football series for the 2016 and 2017 seasons.  The games are scheduled for Sept. 3, 2016 at Jordan-Hare Stadium in Auburn, and Sept. 9, 2017 at Memorial Stadium in Clemson.

The schedules the next few years will feature some of the best teams in the country.  Next year's home slate will include Florida State and Notre Dame.

I usually don't get too excited about announcing future games for two reasons.  First, many times they never come to fruition.  Remember the series against Oklahoma, Oklahoma State, Vanderbilt and Ole Miss?

Auburn seems like a natural rival for Clemson.  We know we own the lake advantage, but Clemson won the last three games in the set and probably should have won the first game.

At this point it is difficult to say what the two programs will look like in 2016 and 2017.  However it looks like both are on solid ground with two very good young head coaches that don't appear to be going to other programs anytime soon.

The college football playoffs seem to have a big effect on scheduling in the future.  No one knows how the playoffs will turn out but I think stronger schedules seem like the way to go.  Big wins seem like they will be worth the risk of playing big games.  If you are trying to get one of only four slots then you are going to have to get the attention of the selection committee and huge wins in big games seem to be the easiest path to that goal.

I really enjoyed all three games against Auburn in this last series.  The trip to Auburn was easy and enjoyable.  I liked the Auburn fans invading Clemson and the neutral site game in Atlanta makes a lot of sense.  Therefore I love the announced 2016 and 2017 games.

However, part of me wished other teams could have been added instead.  A home and home with Tennessee, Florida or LSU would be just as exciting.  Heck, I am ready for another trip to Texas A&M too.  While we are dreaming, let’s see what Texas has on the docket in the next few seasons.