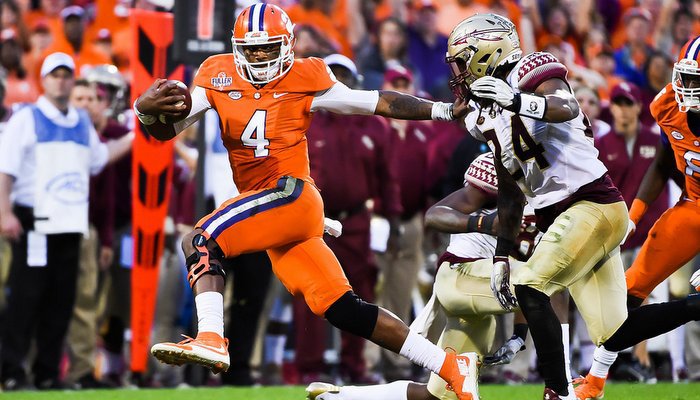 Deshaun Watson is getting some great publicity for a terrific season. In this blog, I want to look at his candidacy and compare it to others who have recently been mentioned as the frontrunners for college football's top individual honor.

First it needs to be stated that the award has changed in recent years. It no longer goes to just the best player in the country; it seems now that you have to play on a great team to get the award. Also, your year in school doesn't matter anymore. Two of the past three winners have been freshmen.

This year I think the race is too close to call. All five of the top contenders have huge games coming up, and four of the five could be in conference title games with the nation watching. Therefore, the Heisman Trophy could be won or lost in the next three weeks.

Here is a look at Watson's numbers compared to the others mentioned:

Best Games:Against Boston College he had 420 yards passing. In the NC State game, he had five touchdowns passing and one rushing. Last week against Syracuse he had 461 total yards.

Worst Games:Against Louisville he had 21 completions out of 30 attempts for 199 yards with two touchdowns and two interceptions.

Notes:Watson is in the top three according to many experts. He has the advantage of being a great player at the most important position on the nation's number one team. He also can rack up big numbers against bad defenses to end his regular season and could have a major matchup against North Carolina, who is ranked 12th in the AP poll.

Notes:Henry is the front runner. He has played big in big games this season. He will also have a chance to make the last impressions with games against Auburn and Florida.

Best Games:In the Indiana game he had 23 carries for 274 yards and three touchdowns.

Worst Games:Against Hawaii he had 27 carries for 101 yards and three touchdowns.

Marquee Moment:Elliott put the Buckeyes on his back in their 34-27 win over Indiana

Notes:Elliott has not been the front runner at any point this season, but he has three huge opportunities ahead of him with games against Michigan State, @Michigan and Iowa.

Best Games:He had 228 yards and three touchdowns against Auburn. He rushed for 244 yards and two scores at Syracuse.

Marquee Moment:Fournette had monster runs at home against Auburn that made many highlight videos.

Notes:Fournette was the leader until the last two weeks when he failed to gain over 100 yards in his team's two losses. His team went from number two to number 17 in two weeks, and he did not have good games in either loss.

Best Games:Against Lamar he had six catches for 182 yards and four touchdowns. Versus West Virginia he had ten receptions for 199 yards and three touchdowns

Worst Games:In a loss to Oklahoma he only had three catches for 51 yards and no scores.

Marquee Moment:Coleman had ten touchdowns in three weeks. The problem is they came against Lamar, Rice, and Texas Tech.

Notes:Coleman has the best numbers but can a wide receiver win it with three great backs and the quarterback of the nation's number one team having a good year? He will get two more chances in big games against Oklahoma State and TCU.