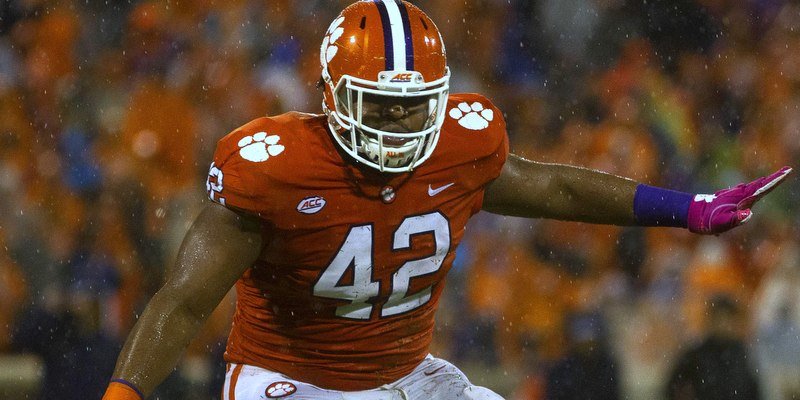 I thought I heard you say on your radio show this week that the 2020 class has a chance to be the best in school history. Did I hear that right? If so, who are the key pieces of the class? Thanks. Love the show!

I think this class has that kind of potential. Last year’s class with Lawrence, Ross, Dixon, Kendrick, Carman, Thomas, Henry, McMichael, Goodrich, etc. was a great one. The class of 2019 is currently ranked third in the country, but next year could be even better.

I think Clemson will get D.J. Uiagalelei, the nation’s number one prospect. Most great classes include a great QB, and this would be similar to Lawrence’s impact on the rankings since this would be another number one player.

At running back, they are involved with two top 50 backs in Daniel Ngata and Demarcus Bowman.

The board at wide receiver hasn’t yet taken shape, but Clemson is involved with the nation’s top two tight ends in Arik Gilbert and Darnell Washington.

They will take five offensive linemen and three good ones committed in John Williams, Waller Parks, and Paul Tchio. Top 100 linemen like Kevin Pyne, Andrew Gentry, and Jalen Rivers are looking at the Tigers.

This could be an amazing linebacker class. The Tigers already have four-star Sergio Allen committed. They have interest in five stars like Antoine Sampah and Justin Flowe and are in good shape with four stars like Kalel Mullings and Kevin Swint.

The secondary also has some great ones interested. Five-star Kelee Ringo has Clemson among his favorites. Four-stars like Luke Hill, R.J. Mickens, Keshawn Lawrence, Cameron Roseman-Sinclair and Miles Brooks have the Tigers in their top group of schools.

They don’t lead on all of those prospects but are towards the top for each mentioned above. There are other four-star prospects heavily involved with Clemson as well. The staff has positioned itself very well heading into 2019.

What kind of team are we facing in Notre a Dame? What are their strengths and weaknesses? How do we match up with the Irish? TY

I haven’t seen as much of Notre Dame this year. It seems like they played at the same time as Clemson several times this season. I saw their opener against Michigan, and they jumped on the Wolverines early and held on late. I was impressed with their defensive gameplan against Michigan.

I saw the second half of the Vanderbilt game, and quite frankly Vandy outplayed the Irish, but Notre Dame held on again.

I saw some of the Wake Forest game. This was the one where Ian Book took over at quarterback, and he provided a renewed enthusiasm for the offense.

Unfortunately, I didn’t get a chance to see the Irish a lot in their final five games.

In talking to a few observers, they like their offensive line despite injuries taking its toll early in the season.

Their wide receivers are big and talented but are not considered burners. Williams is a very good back who had a productive year.

Their defense is much improved from a year ago, and I give the new DC a ton of credit for the turnaround.

I would say this is a very good Notre Dame team, but I would also point out that Clemson is a double-digit favorite for a reason.

After the first nine games of the season or about 30% of the schedule, is the men's basketball team, overachieving, underachieving or just average? It appears the team has struggled in the last few games and there are some big out of conference games coming up. Last year was fun and special but that is in the past, and before the ACC schedule starts, if the team is going to be better than 2nd division in the conference, things have to change quickly.

A couple of things stand out to me, and the first is that they miss the scoring of Gabe Devoe and Donte Grantham. Last year, the three guard lineup was able to score, and that made all the difference down the stretch and in the tournament. This year I don't yet see a lineup that will scare many conference teams but hopefully, by the end of December some scorers will step up, and the team will be competitive. Thanks for your thoughts.

I think this team has underachieved so far. They were ranked in the pre-season, and the schedule was not impossible. So far they have lost two games they were favored in, but the biggest concern is the energy. This team is lacking something, and my first guesses are energy and enthusiasm. I had high hopes, but they haven’t done anything to excite the fan base.