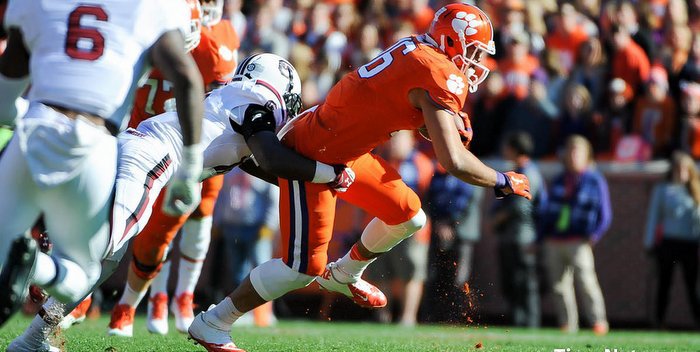 Quick Notes:Auburn has struggled the last two seasons and lost the identity it briefly had under Gus Malzahn. Auburn is 15-11 the past two seasons. They have won just two of their last nine conference games. The Tigers have three five-star defensive linemen in Carl Lawson, Montravius Adams, and Byron Cowart, but questions remain on defense with Kevin Steele taking over at defensive coordinator. Questions also remain almost everywhere on defense.

Quick Notes:The Trojans have fallen in the past few seasons. They have not had a winning season since 2010. Last year they went 4-8 under new head coach Neal Brown. Troy should not be a threat to Clemson on this date.

Quick Notes:Clemson has struggled at Tech in recent years, but that ends in 2016. Georgia Tech has not recruited very well, and the Jackets are coming off of a 3-9 campaign. Georgia Tech has issues on both sides of the ball heading into the 2016 season, and I don't think there is enough talent here to turn the program back around. The only concern here is the short prep time and a Thursday night game on the road.

Quick Notes:Bobby Petrino's team struggled to find an identity last season, but the Cardinals look like they have settled on Lamar Jackson at quarterback. They were young on offense last year but could be a threat with Jackson's feet and play-making ability. This is the second best team Clemson will face in 2016. Louisville has enough talent and experience to present a big challenge.

Quick Notes:Steve Addazio is a terrific coach. Unfortunately, he is at a dead end job. People don't care at Boston College and I believe Addazio deserves more support. The Eagles are coming off an eight-game losing streak, but at least, the trip to Boston is pretty good. The only issue here is a short turnaround for a Friday game. Quite frankly, Friday night college football is bush-league. The nation's elite should not be subjected to play on a Friday night.

Quick Notes:Where is this program headed? Dave Doeren needs to get over the hump, but it appears UNC has taken the reigns in the state. The Wolfpack will miss Jacoby Brissett at quarterback.

Quick Notes:This is the biggest regular-season game in college football next season. These two teams should be in the top five of the pre-season polls next year. The Seminoles return Dalvin Cook at tailback and a ton of talent at wide receiver. The offensive line should be better after a year of experience. They will miss Jalen Ramsey, Terrance Smith and Reggie Northrup on defense, but stars like Derwin James and Josh Sweat are primed to be the next stars in Tallahassee.

Quick Notes:Dino Babers inherits a mess in Syracuse. This program has so little talent and so few playmakers. This is a major rebuilding job on both sides of the football.

Quick Notes:The Panthers went 8-5 in year one under Pat Narduzzi and overcame injuries in the process. This is a physical program, but they will have to find playmakers and more speed to beat Clemson in Death Valley.

Quick Notes:Dave Clawson has his hands full at Wake. They may have another long season ahead due to the lack of talent at so many positions. There is little to build upon for these Deacs.

Quick Notes:This will be Will Muschamp's first game in the rivalry. The Gamecocks have not been very good the past two seasons, and I see more issues in 2016. The offense has concerns at several positions. This is a rivalry, but this is also a big talent gap between these programs.