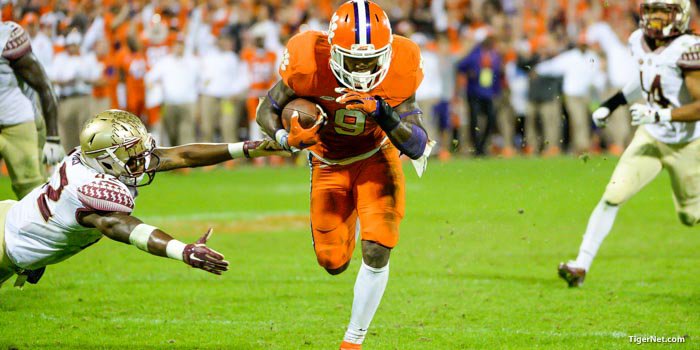 I came away impressed with the talent level from Saturday's spring game. These four- and five-stars the staff has signed on recent signing days were in full display this weekend. This is the most talented football team I have seen at Clemson in years. However, there are still concerns. Here are concerns I have about the 2016 season:

I don't think Auburn will be very good, but it is still a good test to go on the road in the opener. Georgia Tech is a road game. We all know Tech gives Clemson a fight in Atlanta, but Clemson is so much better than the Jackets this one won't be close. The arch rival is down again, and that one won't be an issue either.

This season will come down to only two teams that can beat Clemson this year. Florida State is a top-five team, and their people think this will be one of their top teams in three or four seasons. Yes, this game being in Tallahassee is a major concern.

The other team that has enough talent to beat Clemson is Louisville. The Cardinals return one of the nation's top 15 or 20 teams, but I feel better about this one because it will be in Death Valley.

Losing Mackensie Alexander will hurt, but thank goodness Cordrea Tankersley returns. There are concerns here with inexperience and depth. Adrian Baker tore his ACL and remains a question mark. I like Mark Fields, but the staff says they need more consistency from him. One player that did make some noise this weekend was junior Marcus Edmond. And some newcomers will be here this summer to add more answers. Nevertheless, this spot has to be one of the biggest positions of concerns for any Tiger fan.

The starters left after their junior seasons, so the Tigers will have two new starters here. Jadar Johnson might not be as athletic as the previous starters, but he is a smart player who won't bust coverage as much. Van Smith had a nice true freshman season, but now his role increases as he enters the fall as the starter. I don't worry about now the starters as much here. The issue is depth. Freshmen will make up the depth, here and this is always a concern.

Andy Teasdall was inconsistent last season, so I have concerns entering this season. It seemed Teasdall struggled more as the season progressed. He did a great job in the national title game with his rugby-style punting, so maybe that becomes more prevalent this season.

Tomorrow I will look at four more concerns for 2016, including kick off coverage, backup quarterback, defensive end depth and inexperience at linebacker.