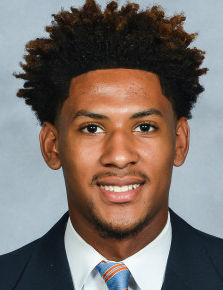 Guard
B I O
Rated No. 24 small forward prospect in the class of 2016 by ESPN ... No. 26 small forward prospect by Scout ... No. 138 prospect, regardless of position, by Rivals ... played first three seasons at Nansemond River High School in his hometown of Suffolk before reclassifying and playing his final two seasons at Blue Ridge School in St. George, just north of Charlottesville ... all-state and all-district performer at both schools ... left Blue Ridge as school's all-time leader in three-point goals ... led Barons to a state championship as a fourth-year junior in 2014-15, and again to the state championship game in 2015-16 ... coached by Bill Ramsey and Cade Lemcke at Blue Ridge ... averaged 16.1 points and 5.2 rebounds per game as a junior at Nansemond River ... shot over 40 percent from three-point range that same season ... coached by Ed Young at Nansemond River ... born April 23, 1997.