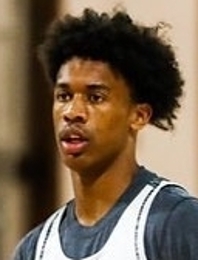 Guard
B I O
Taylor is a 6-6, 185-pound shooting guard from Wake Forest, N.C. and is rated as a three-star prospect, according to 247Sports. Last season, Taylor led Heritage in scoring, averaging 21.6 points per game. He scored 540 points as a junior, adding in averages of 5.2 rebounds, 2.3 assists and 1.6 steals per contest. Taylor’s performance as a junior earned him a spot on the N.C. Basketball Coaches Association All-District Team. Taylor has earned HighSchoolOT.com All-State honors, NBCA All-District, Conference Player of the Year, First-Team All-Conference and is a two-time conference champion and state runner-up his freshman season. Taylor chose Clemson over Miami, Cincinnati and Marquette in October 2020 before announcing a release from his letter of intent in March 2021.