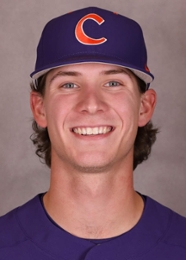 
Converted outfielder who has a good fastball.


2019: Had an 0-0 record and a 5.06 ERA in six relief appearances … in 5.1 innings pitched, he allowed six hits (.286 opponents’ batting average), no homers and four walks with six strikeouts … held opponents to 2-for-13 (.154) with runners on base and 1-for-8 (.125) with runners in scoring position … pitched 1.0 innings in relief, allowing no runs and no walks with one strikeout at South Carolina on March 3; was his first appearance as a Tiger … pitched 2.2 innings in relief, allowing two hits, no earned runs and no walks with two strikeouts against College of Charleston on March 19 … played for Lexington County in the Coastal Plain League in the summer, where he was 0-0 with a 1.54 ERA, an .077 opponents’ batting average and 17 strikeouts in 11.2 innings pitched over 10 relief appearances.


2018: Redshirted as a member of the developmental squad.