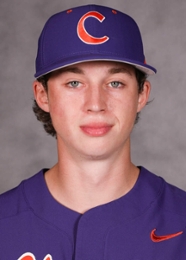 
Redshirt freshman who showed the power potential in practice to contribute.


2019: Redshirted … No. 125 freshman in the ACC in the preseason by Perfect Game … played for Forest City in the Coastal Plain League in the summer, where he hit .275 with two doubles, five homers, 29 RBIs, 13 runs, a .402 on-base percentage and four steals in 31 games; Coastal Plain League All-Star Game selection.


• Favorite hobbies – Watching or playing sports and spending time with family and friends away from the field
• Interesting facts about family/parents – His entire family is Canadian, and he is the first to be raised in the U.S.
• Favorite food or candy – Steak or pizza
• Proudest childhood accomplishment – Winning the South Carolina state championship when he was only eight
• Ideal vacation spot – Banff, Alberta or Hawaii
• Childhood hero – His father
• One person, living or dead, to eat dinner with – Tom Brady